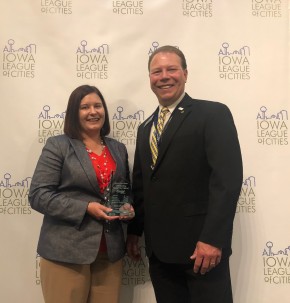 Kinser was brought in to Marshalltown in November 2016 because of her sophisticated understanding of municipal finance, her people skills, and her energy in community development. Recently, Jessica expertly navigated a large natural disaster when a pair of EF-3 tornadoes with wind speeds that reached 144 mph swept through Pella and Marshalltown.

Marshalltown suffered the most widespread damage. The tornado coursed through downtown, toppling part of the historic Marshall County Courthouse. Jessica proved her mettle in working with community organizations and FEMA in managing the reconstruction for the City.

The Rhonda Wood Smith Award was created to recognize exemplary work of young city officials and those new to city government. The criteria included innovation, bold leadership, commitment and sacrifice. The award was named for Rhonda Wood Smith, a single parent who served as mayor of Garner while working as a municipal consultant. She succumbed to cancer early in 1997 after establishing an outstanding reputation as a civic minded person committed to her community. The intent of the award is to encourage and affirm participation in local government by young people who may make greater sacrifice for public service due to significant career and family commitments.

Congratulations to Jessica Kinser for her work as Marshalltown’s City Administrator and for receiving the Rhonda Wood Smith Award as an outstanding young city official.